Let’s face facts; unless you’re a woodworker who specializes in hand tools or you have more time than you know what to do with, you’ll need a planer to take the hard work out of a common shop task – dressing lumber. Even if you purchase pre-dressed lumber, it’s rarely going to be straight and flat by the time you get your hands on it. In addition to dressing lumber to finished thickness, with a planer you can do a number of other fancy things like create tapers, joint wide boards and machine chamfers. 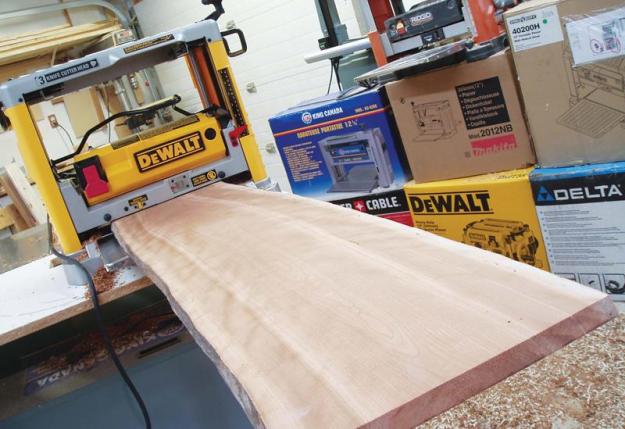 Lead photo by Rob Brown;  All others courtesy of manufacturer

It used to be that owning a planer meant clearing a large area of your valuable shop floor space to make room for a hulking beast of metal. These were fantastic machines (I’ve seen them so enormous that car tires were used for infeed and outfeed rollers) but they were far too large and expensive for a hobby woodworker with typical space and monetary restraints. Enter the bench top thickness planer. These little guys have been around for some time but today there are so many choices that you need to do some research to find out which one is best for the work you do. Most have enough power and capacity to plane almost anything you want to shove through them. Their smaller motors don’t like to be overloaded, so a few extra passes at a lighter depth setting may be required in some situations. They also have the extra advantage of being easy to move around or even store out of the way until needed. Although some machines are built more solidly than others, planer basics are all the same. A planer provides a flat surface that will support the underside of the work piece while the board is being machined. Infeed and outfeed rollers grip the work piece, holding it down while pulling it across this bottom surface. While this is taking place the cutterhead is spinning above the work piece removing material from the top surface of the board, ensuring both faces are parallel and smooth.

Start with the Basics
All of the machines tested have a 6″ max. depth of cut. It’s a rare situation to need to plane a piece of lumber that thick, but it’s nice to have the option if the situation presents itself. The width of cut is also fairly standardized, ranging from 12″ to 13″. Wider is always nicer, but that alone shouldn’t heavily influence your decision regarding what machine to buy. The amount of material to be removed is set by the user by adjusting the height of the cutterhead. While planing a piece of wood narrower than 6″ the general rule is you can remove 1/16″ per pass. If you’re planing widths of over 6″, removing only 1/32″ is recommended. You should make some adjustments for planing hard or soft woods. In general, it’s a good idea to remove less material than more; you’ll end up with a better surface and it will be easier on the machine. These machines all had very similar size motors, so power differentiation will rarely be an issue.

The Difference is in the Details
Where these machines start to differentiate themselves is in the details. Most of the machines have features that make them easier and more enjoyable to use than their predecessors. The features that you go for are going to depend on the work you do … and sometimes the amount of money in your bank account. Let’s look at the considerations. Dust extraction is an important aspect of woodworking. Although the chips that a planer makes are less likely to work their way into your respiratory system, there is still a health danger if you don’t protect yourself. Extracting as much dust as possible directly off the machine is a good place to start. Some machines make it a bit easier to remove the chips and keep your shop floor and air clean. All of the machines, except for the King, Porter Cable and the Makita, have dust collector ports. Even without the dust hose hooked up, all of the machines eject the shavings satisfactorily. The only machine that lags a bit in ejecting the shavings is the Delta, but with a dust collector it works just fine. Surprisingly, because of the fan-assisted chip ejection, the DeWalt 735 threw shavings well over 10′ during the comparison. Although this is a little bit of overkill, it’s better than not clearing the chips properly.

It’s very rare to take a plank directly from the planer and apply a finish without sanding its surface. Nevertheless, an important aspect of planing is to have as smooth of a surface as possible once the task is complete. With a smooth surface you will spend less time sanding. Every one of these planers was brand new out of the box and most performed admirably, leaving an impeccable finish. The exceptions were the King and, surprisingly, the Steel City, the only planer with a helical cutterhead. Both machines left a couple of very small ridges and a less than perfect surface. Nothing that couldn’t be smoothed with some extra sanding but that’s one of the things we’re trying to avoid.

While using all the different machines, it quickly occurred to me that weight may be a factor in selecting a bench top planer. If you plan on hauling one of these machines with you on a daily basis, consider how much you will be lifting. The only unit with adjustable feed speed was the DeWalt 735. This is a nice feature if you want to be extra sure the finished surface will end up as smooth and chip-free as possible. You can do most of your thicknessing at the faster speed, then, for the last pass, slow the feed rate down to get as smooth a surface as possible.

Also consider the knives that each planer uses. They will be what are cutting the surface. All of these machines have reversible knives, so once the first edge is dull you can flip them over and use them a second time without having to sharpen them. The Steel City helical head has indexable knives, which can be turned four times, and generally speaking a helical head helps machine a smooth surface with less chipping, especially with figured wood.

Red Herrings
Snipe often occurs on the leading and trailing couple inches of the top surface. It’s not the end of the world but it can be slightly problematic from time to time. While the workpiece is only being held down by one infeed or outfeed roller, there is a tendency to remove a little extra material – about 1/32″ to 1/16″. To combat snipe, the DeWalt 734, Delta 22-590 and the Steel City 40200H have a user-activated mechanism to lock the cutterhead in place. These all work fairly well but I don’t believe this should be a strong factor in choosing a machine. The little bit of snipe that occurs very rarely adversely effects a workpiece, as it can be sanded out or is lost when a workpiece is cut to length.

Another feature you will find on many machines, and one I don’t think is overly important, is a depth-of-cut stop. The theory behind this feature is that by setting the indicator to a specific thickness you can return to that dimension repeatedly to plane other boards to the exact same thickness. Using this feature often results in tilting the cutterhead on a slight angle, and planing that angle into the workpiece, or obtaining a slightly different thickness. Even if the feature did work perfectly, I think it should be overlooked for more important ones.

Which One Should You Buy?
The DeWalt 735 was ahead of all the other units until I factored in the knife quality and how few passes it took to start seeing ridge marks on a freshly planed surface. I think this is unacceptable. I also thought the noise level of the DeWalt was quite high. Also, plan on using a dust collector with this unit to harness the hurricane of chips that spray out the back end. If DeWalt can get the knife issue straightened out – a representative from DeWalt said by early 2011 all their new machines will come equipped with new knives – their planer will easily be the top of the class, but until then I would lean towards to Ridgid R4330. Its overall solid performance was impressive. After hundreds of linear feet of Cedar, a tough species on blades, the Ridgid R4330 still performed like new. Chip ejection without a dust collector worked well and it also worked well with a dust collection hose hooked up. It has most of the important bells and whistles, if you plan on using them. On top of all this, the ability to sign up for lifetime service agreement with Ridgid makes the purchase even easier to stomach. If you’re an occasional planer user and can’t justify spending much money, I would go with the Porter Cable PC305TP. It seemed like it was built well and just quietly (relatively speaking) got the job done. The King C-426C came in right behind the Porter Cable, offering a decent planer at a very reasonable price. General is going to be offering a new 13″ bench-top planer, similar in size and style to the other machines included here. Though it wasn’t available for me to test with the rest of the group, it will be available to the public in November 2010.