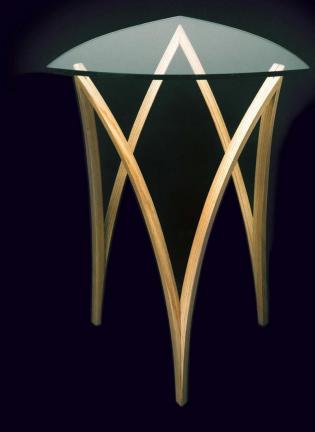 An accurately made form and a healthy dose of planning both play important roles in producing furniture parts with compound curves. 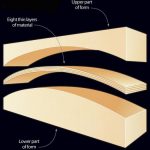 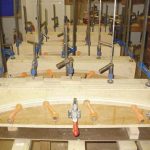 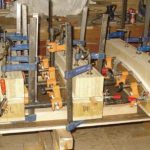 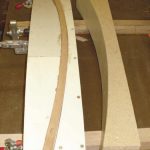 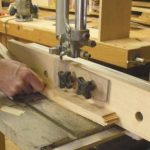 Dress the material on all four sides, then resaw it into thin, flexible strips. The thickness of these strips will depend on the severity of the bend and type of species you’re working with but a multiple of the strips should equal the thickness of the finished piece. Cut one strip and test bend it against the form to get a starting point. If it’s difficult to bend, or if it breaks, you will need thinner strips. Thinner strips also have less “memory”, which will reduce spring-back. The laminations for this table have been machined to 3/32” thick, so eight layers will form the ¾” thick part. In terms of width, you will need to mill the parts much wider than you initially think because after the first glue-up you will have to resaw the curved blank into narrow strips, then plane them flat so they can be glued up a second time. This second resawing process removes approximately half of the material. When in doubt, start with wider material.

For stage one of the glue-up, the set of laminations are glued between two forms. These two forms will be used for both stages of the glue-up. The radius on each form’s face differs by ¾” (more importantly, the final thickness of the laminated furniture piece). A trick to help keep the colour and grain of the part consistent is to keep the laminations stacked in the same order they’re initially cut from the rough stock, then re-glue them in that same order.

If you can, scrape the glue from your lamination before it dries hard. When completely dry, joint one edge and rip the other side of the curved blank on your table-saw, giving you two parallel, square sides. With your planer, dress both jointed and sawn edges to ensure you are dealing with smooth surfaces. Resaw your curved lamination into narrow strips the same thickness as the first batch – in this case 5/32″. After each cut, re-plane the freshly cut surface of the blank before you cut the next lamination from the blank. Once all the strips have been resawn, plane the rough surface of each strip so each piece is 3/32″ think. The easiest and safest way to do this is with a false bed surface in your planer made from ¾” melamine. With a cleat on the underside, the false surface will raise the thin strip to the blade (most planers will not lower the blade close enough to the bed) and support these thin strips. Don’t stand directly behind the planer when machining very thin strips, as there’s a slight chance the rotating blade could cause kickback. It’s also a good idea to make a few extra strips just in case this happens.

To laminate these curved pieces together and form a compound curve, you will need to add a liner to the jig. The liner’s only purpose is to align the laminations while they’re drying. The thickness of the liner should be the same, or slightly less than the thickness of the final piece being glued up – two pieces of ⅜” wiggle board for this ¾” thick leg. Glue the pieces of wiggle board to each other in the form, making sure not to glue these layers to the form. When dry, screw both sides of the liner to the form, leaving screws as far from the centerline of the form as possible. With a template cut to the same radius as the curve required, screw it to the liner and use a router and template bit to machine the groove. The template bit must be the same width as the finished part – ¾” in this case. More than one pass may be required. During the second glue-up stage, the laminated strips will be held in this cavity. Remove the screws from one side of the liner. This loose side will be clamped against the laminations during the second glue-up, sandwiching the laminations between the two sides of the liner, perfectly aligning all the layers. Apply glue to the curved strips and place them in the groove. Masking tape will assist with keeping the strips positioned while you fiddle with getting the clamps positioned. Carefully apply pressure to the loose liner and the upper half of the form, capturing the laminations in the groove. Applying packing tape to the liner parts and forms will keep everything from becoming one. Since the lamination is completely enclosed, 24 hours is needed for the glue to dry. The finished lamination should only need minimal shaping after it is cut to length.

If you are unsure about the procedure practice with some cheap lumber – 2×4 material works great – before you slice into that last board of curly koa.

Two Stages, One Form
This is the set-up for the initial glue-up. During the second glue-up a liner will be inserted on either side of the work piece to help with alignment. 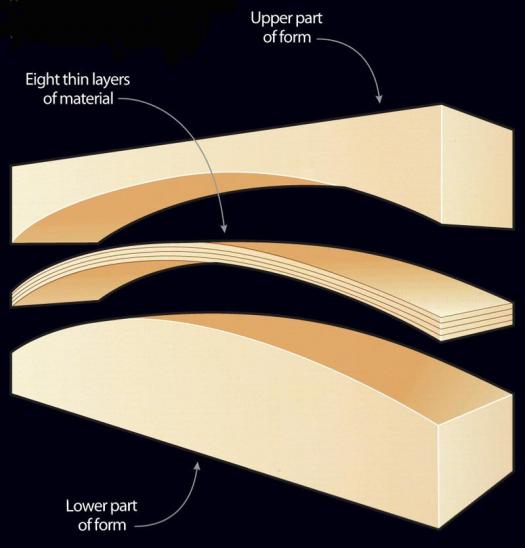 Resaw Into Thin Strips
After you formed the initial bent lamination resaw it into thin strips and prepare them for the second lamination. 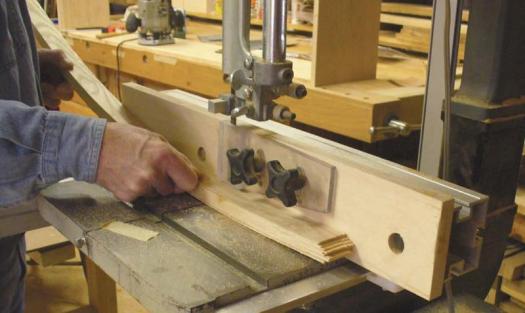 A Liner Keeps The Strips in Order
Half of the liner (right half, in photo) is screwed to the form while the other half is clamped in place, precisely positioning the second glue-up. 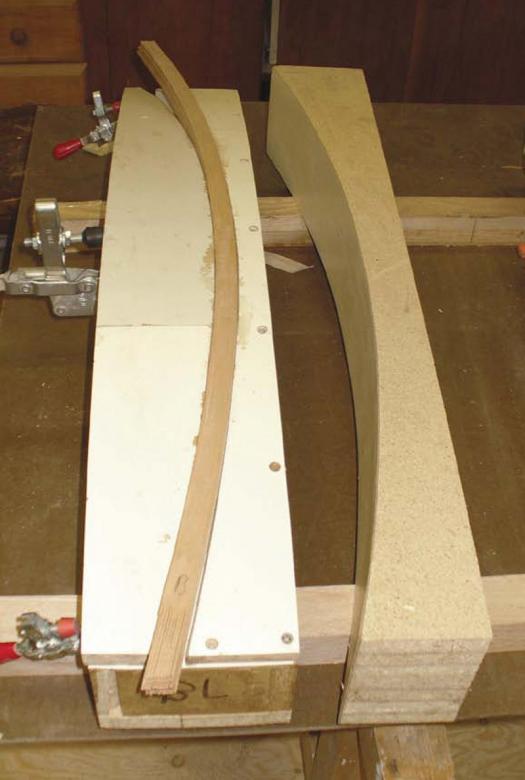 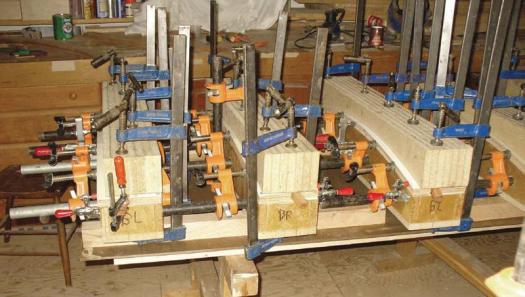 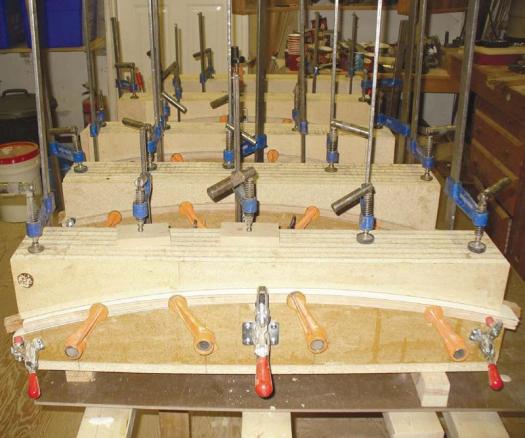