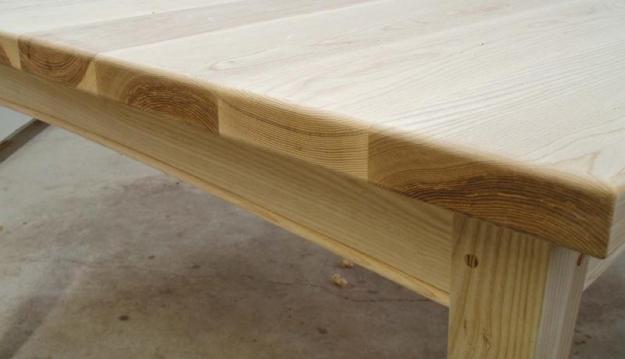 Skill Builder: Wood movement is inevitable. However, there are many design and building options to help a craftsman work with it – not against it. 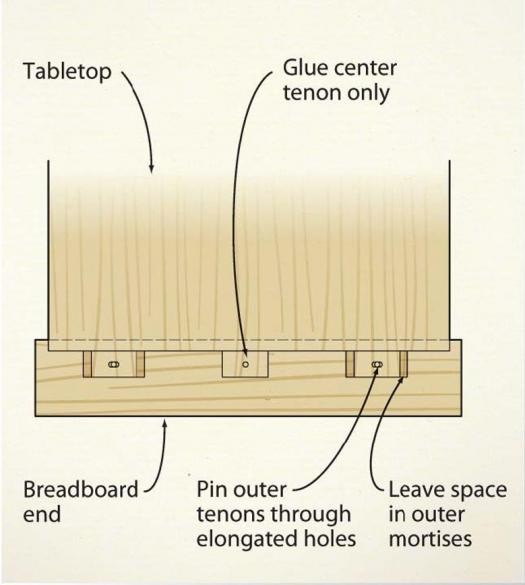 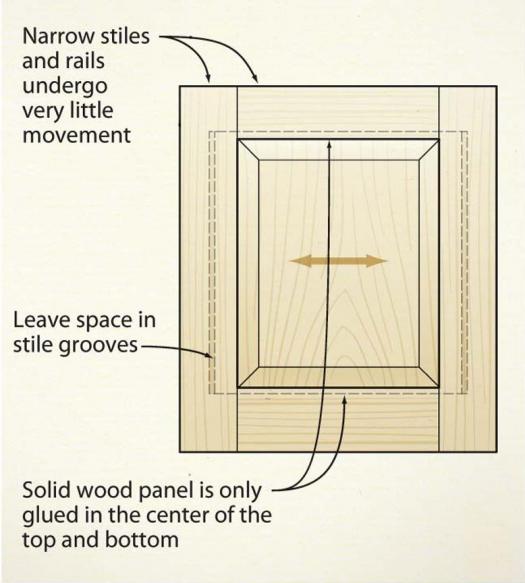 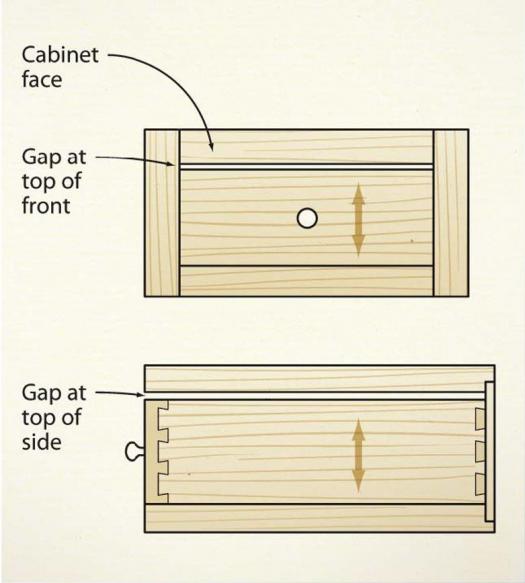 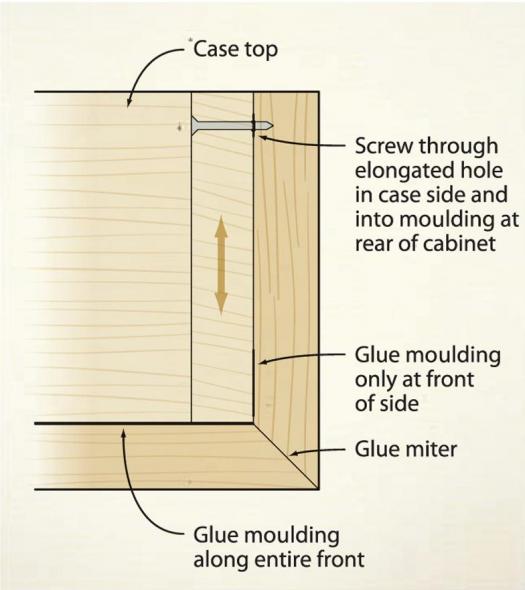 Woodworkers need to do two things when engineering and building a piece of furniture: (1) machine joinery that will secure different pieces of wood to one another with the appropriate amount of strength, and (2) allow wood movement to freely take place. The first point, joinery, has been discussed at great lengths. The second point is not discussed as often, but it’s a very important part of making furniture that lasts. Wood always moves with changes in humidity, so it’s important for woodworkers to understand how to make a piece of furniture that will accommodate that movement and stand the test of time.

Remember, wood moves more tangentially than it does radially; approximately twice as much, depending on the species of wood. In the longitudinal direction, wood essentially doesn’t move at all. Keep wood movement in mind while you’re purchasing lumber and laying out parts. Parts should be made from quarter-sawn material when possible to reduce wood movement. As well, using quarter-sawn lumber will reduce the possibility of a joint loosening over time or a piece of wood developing a crack. These things happen only when there is too much tension or compression force within the wood. Wood is always on the move, so it’s best to understand how to work with it rather than against it. Here are a few common situations where wood movement has the potential to destroy a piece of furniture, and what you can do to stop that from happening.

Although there are many ways to machine this type of door, the reason behind its basic structure remains the same. The frame determines the overall dimension and provides the structural strength required, and the panel is allowed to expand and contract within the frame while providing a visual and physical barrier between either side of the door. The overall width of the frame expands and contracts very little because the frame width is kept to a minimum – usually between 2″ and 4″ depending on the type of door. There will still be movement taking place within the frame, but movement is minimized a great deal. If the entire door was made by edge gluing boards together, the width of the door would vary drastically from season to season. It would expand into the door opening causing the door to bind during the more humid months, while shrinking during the dry months, leaving a large gap.

When constructing a frame and panel door make sure the joints holding the frame together are strong enough to withstand any stresses acting on it. I find a standard cope-and-stick joint that is machined on a router table doesn’t provide enough mechanical strength or glue area to produce a strong joint. Slip joints, mitred joints with splines or keys, half lap and mortise and tenon joints are a few joints that are appropriate for use in a frame and panel door.

Solid wood tabletops are beautiful. Solid wood grain is much more durable than veneered surfaces and the scratches and gouges that occur over time can be easily stripped and sanded away. The only problem is, it will move quite a bit as the seasons change. If secured directly to a table base with aprons and legs, (a pedestal base doesn’t pose the same threat) it will eventually break the base apart. I like to fix the top in one area – usually the center or one end – with wood screws and let the top move on either side of the screws. To make sure the top stays in contact with the base I do one of two things. One method involves gluing and screwing cleats to the apron, drilling oversized holes in the cleats and using screws with washers to hold down the table. The oversized holes give the top some room to move. The other option is to use specially made wood or metal hardware. The hardware is secured directly to the underside of the top with woodscrews and has one end that is placed into a groove or notch in the back of the apron. The groove will allow the top to move but will still keep the top in contact with the apron. There are a number of different hardware styles available for purchase. If I’m securing a large top to a dining table base I tend to make my own hardwood blocks. They fit into a groove I route into the apron using a plunge router and edge guide. The blocks I make tend to measure about 1 ¼” x 2 ½” x 2 ½” and have a ½” tenon to fit into the routed groove.

When laminating a solid wood panel there are two schools of thought. One states that the growth rings should be glued up in an alternating pattern. That is, when looking at the end grain of the boards ready to be laminated the growth rings should alternate up, down, up, down, etc. The logic being when wood movement occurs one board will tend to cup upwards, the board beside it will cup downwards. The tendency will be for the glued-up panel to stay flat overall, and not produce a large amount of internal stress. The downside to this method is being left with a slight washboard effect as you run your hand across the panel. The other method involves gluing the boards with all of the end grain cupped either up or down. The panel will need to be secured to something in order to keep it flat, but there will be no washboard effect. I think there is a time and place for both of these methods. If the panel can be fastened solidly to the rest of the piece of furniture, and the piece of furniture is strong enough to keep the panel flat I usually keep the end grain cupped in the same direction. This is especially true if the top is on the thinner side (about 1″ thick or less), because it will have less strength when finished – and be more easily held down. If the solid panel can’t be held flat by the piece of furniture then I usually alternate growth rings during glue-up. Also, if the panel is going to finish quite thick – well over 1″ – I tend to glue it in an alternating pattern, because the thicker wood will have more strength and build up more internal stress. These are strictly guidelines. When making one-of-a-kind pieces of furniture each decision is made with different issues in mind, depending on the wood and design of the piece.

Attaching Cornice and Waist Moulding to a Chest of Drawers

If you are making a traditional chest of drawers, or a highboy, you’ll need to attach a number of different mouldings perpendicular to the grain of the gables. If you glue the moulding directly to the solid gable it will restrict the gable’s movement, causing either the gable to crack or the moulding to fall off. Instead, machine an elongated 3⁄16″ wide slot (for a #8 screw) in the gable, about 3″ from the back edge of the gable directly where the moulding is going to be placed. Glue the front 3″ of the moulding to the case and insert a screw and flat washer through the slot and into a pilot hole in the moulding. The glue will keep the front edge of the moulding in place while the screw will hold the back end tight to the gable’s side while the slot allows movement to occur. If it is a long moulding you can machine a number of slots along the length of the gable to keep it snug over its entire length.

One of the strongest methods of joining wood is with mortise and tenon joinery. There’s a lot of face grain glue surface which increases joint strength and there is also a mechanical aspect to it. Tenons with a small width (2″ or less) pose little problem, but when a tenon is over 3″ in width wood movement may be problematic. Because the grain of the tenon is perpendicular to the grain of the mortise, movement of the tenon will be restricted. The tenon can’t move but the rail it’s a part of is free to move. The result is either a split in the rail, or a tenon that loosens over time. There are a few things that we can do to reduce or even eliminate this risk.

The simplest thing to do is to make a tenon no wider than 3″, and bypass the problem all together. But for strength reasons, there are times when a wider tenon is required. If this is the case be sure to select quarter-sawn material for the rail. Quarter-sawn wood moves much less than flat-sawn wood. You will be able to add some width to the tenon without problem.

If a very wide tenon is required, like a breadboard end or headboard, you need to take a different approach. The tenon can be machined as wide as you require it, but only the middle section, or one end in some cases, is glued. The rest of the tenon requires pegs to be inserted through slots cut in the cheeks of the tenon. This locks the joint in place. The slots will allow the solid wood to expand and contract. The slots should be machined with great care and accuracy so they line up with the holes that are drilled through the mortise. The further away from the glued area the pegs are, the more room they need to allow for wood movement.

Understanding wood movement is paramount for a woodworker to be successful in the craft. Without this fundamental knowledge, beautiful projects can self-destruct and become feed for the wood stove. Don’t let this happen to you.