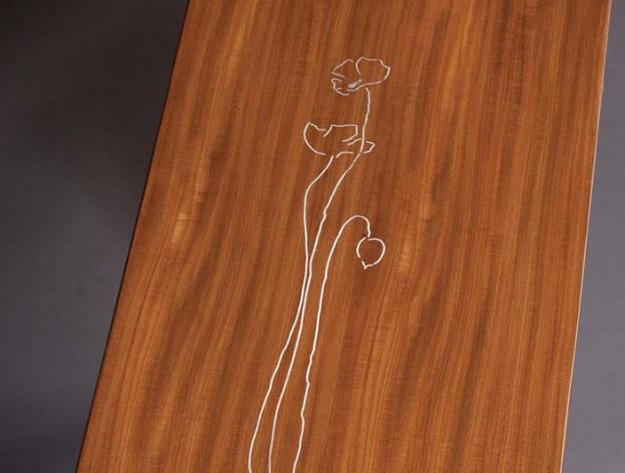 Finer Details: It’s rare for a piece of furniture to evoke thoughts of life and death, destruction and grace. This table, with its inlayed silver, does all that and more.

My inlay design is a WW2 tank “shooting” three bullets (represented by straight lines) up a leg panel. The bullets meet with the table top, becoming organically shaped poppies. The material for the bullets and poppies is 1mm x 4mm sterling silver flat wire, which I bought through a local jewellery supply shop. To make the 3mm deep groove to house the silver wire, I used a plunge router with a 1mm dia. spiral bit.

First, I dry assembled the pre-finished panels to make the table. Then I drew the design onto tracing paper and laid it onto the panels until I found grain patterns that complemented the design. For the poppy design I used a craft glue stick to tack the tracing paper down. For the straight lines on the leg panel I used a ruler and a white pencil to mark their location.

I disassembled the table and routed the straight lines first. With the distance from the center of the bit to the edge of the router’s base in mind, I used double-stick tape to attach a straight piece of wood to the legs’ surface so the router base would have something to run against. This was an easy set-up, which I could quickly adjust to cut the different grooves.

With the three straight grooves finished, I reassembled the table to ensure the bullet lines matched the poppy stems. I disassembled the table and cut the grooves for the flowers. To get an organic look I did this freehand with the router and made sure to only drink tea before starting, as a steady hand was needed. Then I used a card-scraper, which I modified to have a slight hook, and cleaned out the grooves of any debris.

To determine the length of silver I needed, I measured the groove with a piece of string. This helped prevent the finished surface from getting scratched and made measuring the curved parts on the flower petals easier. I then placed two towels over the panel on either side of the grooves to protect the wood. Using wire cutters, I cut the silver to length and turned it on edge. I abraded the sides of the silver in order to give the silver some tooth. I mixed up small amounts of two-part epoxy, which had nine minutes of open time. Working in short sections, I put the epoxy into the groove using a wooden BBQ skewer, which I modified to have a flat paddle-like end.

I used two methods to tap in the silver. For the straight sections I placed a small block of wood on the silver and tapped that with a small hammer. For the flower petals I used my plane adjustment hammer, which has a wood block on one side of the head.

After completing each straight line, I put a board with some weight on top of the inlay and let the epoxy harden. I inserted the flower stems in the same way as the bullets, but for the flower petals I used short strips of silver and manipulated them to match the curves with tweezers. For some of the petals I used a knife to extend the routed groove to create a thinner more organic line and cut or hammered the silver tips to match the groove size.

I let everything dry overnight and used a steel-bottomed block plane (brass is too soft) to flush the silver to the wood.

I used the epoxy sparingly to avoid a mess. Don’t use green tape to mask off the wood as I did. I didn’t notice that tiny pieces of tape got stuck between the wood and the silver until it was too late. I had many tiny green monsters to deal with.

To make the silver tank I photocopied my design and used craft glue to attach it to an 18 ga. sheet of silver. Using a small coping saw with a metal blade, and beeswax for lubrication, I cut the tank out. I then filed the edges and had a local jeweler buff the tank to a nice polish.

To trace the tank design onto the wood, I made a negative template and tacked it to the wood using craft glue. I used a laminate trimmer to remove most of the waste for the tank then used a small chisel to perfect the edges. After doing one practice piece, then the real thing, I epoxied the routed area and laid the tank in. I clamped on a wooden caul I made to match the tank profile and let the glue cure overnight.

Layout is Adjustable
Once the design was drawn onto a sheet of tracing paper, Nicole was able to position it where it would look best on the piece. She used a glue stick to temporarily tack it down. 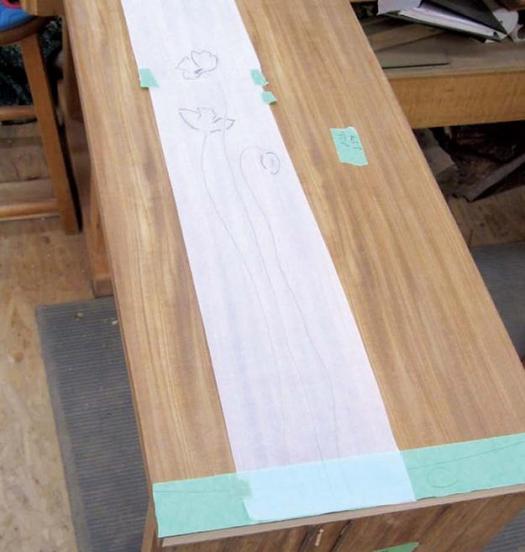 A Clear Groove
With the 1mm wide groove machined, Nicole made sure there were no splinters or debris in it; she used a modified card scraper. (Photo by Mark Henderson) 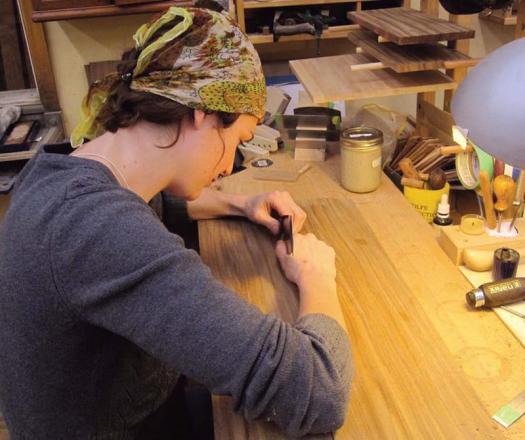 Install the Silver
For the curved sections a plane hammer was used to gently tap the silver into its final home. For the longer lengths of silver, a flat wooden block was placed on top of the silver to spread out the impact from a hammer’s blow. 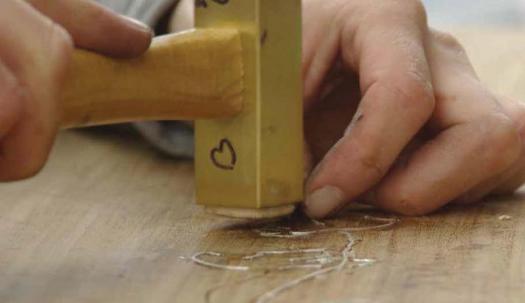 Tank Cavity
After making a negative template, Nicole ran a laminate trimmer with a bearing bit against it to produce the cavity that would house the silver tank. After a practice attempt with scrap to ensure the method would work, she tackled the real thing. 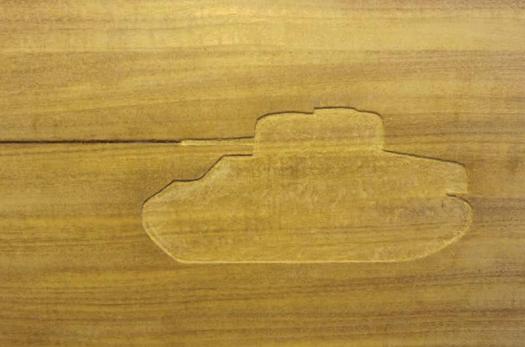 Clean the Area
After the adhesive dried, Nicole cleaned the wood surface and inlay of all the tape. If she were to do this again she would not have used tape to mask off the area, because little bits of tape adhered to the inlay. 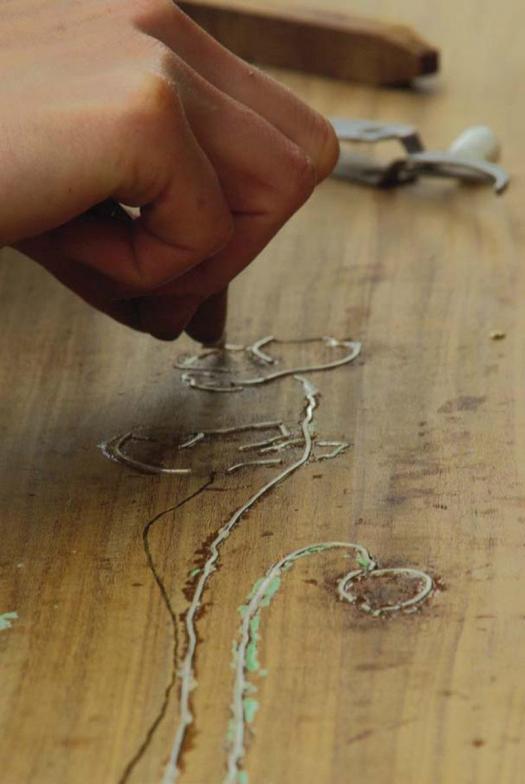