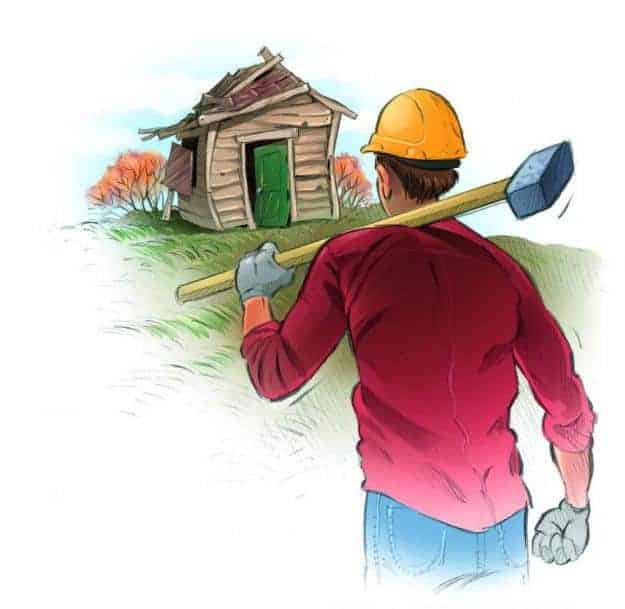 It’s no secret that building things with my own two hands isn’t exactly my forte. If it were, I probably wouldn’t have this column and you wouldn’t be read­ing it right now.

I am, on the other hand, quite good at smashing things. Whether it’s a crowbar against a rotting piece of wood, my keyboard against the desk when I can’t seem to string two coherent sentences together, or my head against the wall when my kids just won’t go to sleep. But I digress.

Earlier this summer my wife and I decided it was a good time to replace our old, worn-out shed with a new one. Not only would it help with the resale value of our house should we decide to move in the next few years, but I was growing tired of finding the wheel wells of my summer tires full of stagnant water every spring.

We also decided that given my relative lack of experience when it comes to construction projects, I shouldn’t be the one to spearhead the project. So, we opted to buy a shed and have it assembled in our yard instead.

We looked around for a few weeks and decided we could afford one that was about 10′ × 8′ – fairly close to our existing 12′ × 5′ shed. We got a few quotes and settled on one company, but balked at the $750 demolition and removal portion of the quote.

I didn’t mind putting a little sweat equity into the project to save a few bucks.

Unfortunately, I chose one of the hottest weekends in early July to get started.

Just after 8 a.m. Saturday morning I climbed to the top of the ladder that was perched against the shed wall and realized right away why my tires were wet every spring – most of the shingles had rotted away, leaving just the bare quarter-inch plywood to hold out the rain and snow.

Once the roof was down, I started taking apart the walls, and I noticed the building was seemingly built to withstand hurricane-force winds. Multiple 2×4s were nailed together to form the frames, and the builder used about twice as many construction nails as needed to hold it all together.

When that first day finally came to an end, the walls and roof were down and all that remained was the wooden floor. It would only take a few more hours of work the next day to finish.

With the hardest portion of the work done, just before 9 a.m. the next morning my father-in-law texted me to ask if I needed any help demolishing the shed.

I’m sure his timing was purely coincidental.