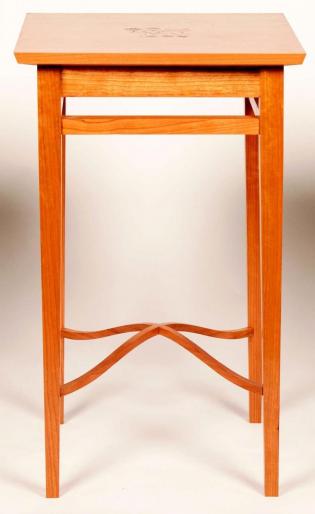 Finer Details: This set of three side tables, with delicate curved stretchers, resides at Rideau Hall in Ottawa. Learn how Peter Coolican made the stretchers and secured them to the table’s legs. 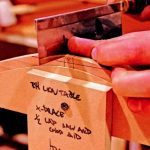 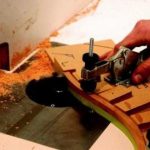 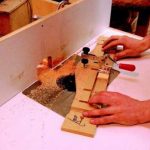 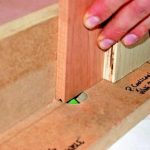 The stretchers connect legs kitty-corner to one another, so it’s important to have an accurate elevation drawing in which the table is oriented 45° from the usual front view. From this drawing you can see the angle at which the stretcher meets the inside corner of the tapered leg. You can also see the total length of each stretcher. Be sure that the stretcher in your drawing doesn’t stop at the inside edge of each leg. The angled shoulders of the stretcher extend passed the inside corner to mate with two inside faces of each leg. Just underneath the stretcher, between the two bottom corners of the part, draw a horizontal line. This line will later become a registration block on your shaping jig.

Notch the Ends
With a tight throat plate and an angled push block, Coolican machined the notch in the ends of the stretcher blanks that would fit flush on the corner of each leg. 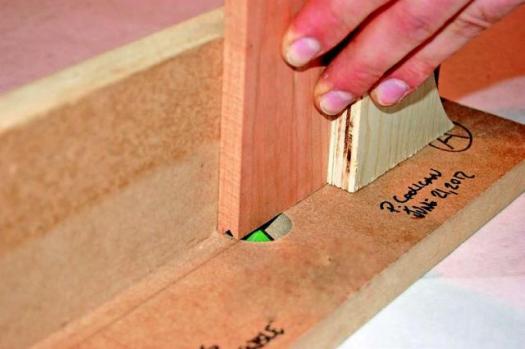 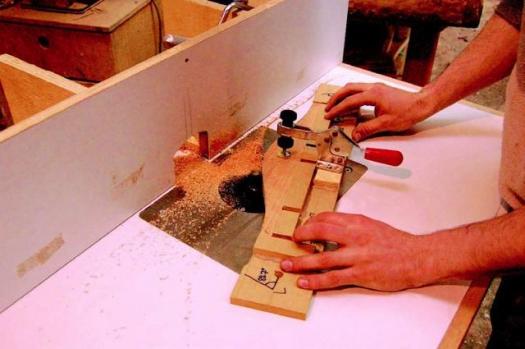 The Curves
Coolican made two template jigs to accurately and consistently shape each stretcher. The rectangular workpiece is first bandsawn and then trimmed to final shape (top), then a second jig is used to shape the underside of the stretchers (bottom). 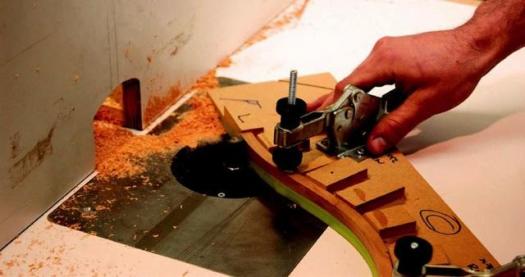 Half Lap Joints
Hand tools are used to create the upper and lower notches, joining the stretchers together at their centers. Coolican made a dedicated support jig to assist him, but the template routing jigs could also be used for this purpose. 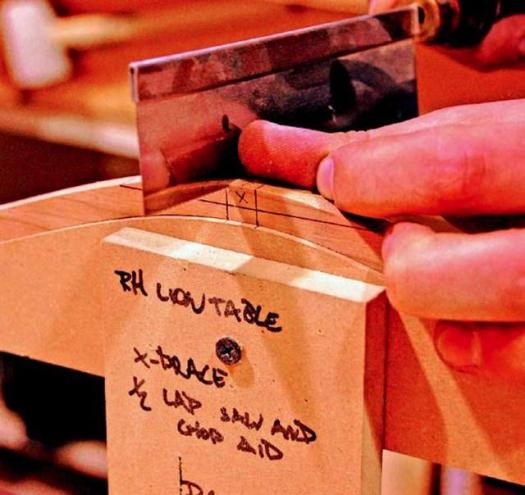 Take the dimensions from your drawing and mill your stock into a blank that is wider than the elevation of the stretcher, but thickness-planed to its final size. Using a wedge and the tablesaw, cut each piece to length at the angle that it meets the leg.

Both leg and stretcher are mortised and joined with a dowel. Using a drill press and a simple jig to hold the leg on edge, drill a mortise on the inside edge. Do this before tapering so that you don’t have to worry about angling the jig, and the mortise can be drilled 90° to the leg. Be careful when machining the leg later, as it’s important that this mortise remains centered on the edge of the leg.

Next, mortise the ends of each stretcher at 90° to the leg. Because the end of each stretcher has been cut on an angle, it is important to set up your cut referencing the long side of the stretcher blank. I chose to cut this mortise with a mortising jig and a plunge router. The router with a spiral up-cut bit won’t wander or vibrate like a drill bit, which is important when working with such delicate parts. When laying out the mortises, be careful not to cut into them later when shaping the stretchers. A double-check of the drawing is always a good idea.

With a V-groove router bit, rout a channel on each end of the stretcher blank on the router table. Set the depth of the bit so that you leave a small amount of material on either side of the cut. This extra meat supports the front of the piece as it moves through the cut and gives you some room for paring the joint later if the fit isn’t just right. Using a custom push stick with the same angle as the piece will help keep it from rocking forward or back, and will keep your hands away from the cutter. It’s also a good idea to use an auxiliary fence to minimize the space between the throat plate and the bit.

Build the template jig to shape the top of the stretcher blanks. Using tracing paper and spray glue, transfer your drawing to a piece of 1/2″ MDF. Mark the angle on the end of each stretcher, the horizontal line connecting the corners on the underside of the stretcher, and the location of the half-lap joint where the two stretchers cross. This will help later on when laying out the joinery on the shaped stretchers. Now, cut along the outside of the top line using the bandsaw. With a spokeshave and sandpaper, shape and smooth the edge of the MDF until it matches the curve from your drawing. Glue a registration block to the face of the template, along the line that connects the two bottom corners. This will register the length of the stretcher blank parallel to the jig. With one of the stretcher blanks carefully centered on the jig, glue two more registration blocks on either end of the blank. These blocks will register the angled ends of the part and keep the blank from moving laterally while routing. Finally, equip the jig with a toggle clamp or two to keep your hands free from the router bit. Insert the blank into the first jig, remove the excess material with the bandsaw, and rout the line clean with a bottom-bearing template bit.

It’s time to repeat the whole process (with some minor variations) to shape the underside of each stretcher. After the MDF template has been accurately shaped, glue angled end blocks to the face of the jig. With a curved top, there is no more long flat registration block, so many small blocks should be used to support the piece along the curve. Use two toggle clamps to hold the piece in place, but be careful they stay clear of the router bit. Rout the piece with a smooth movement, while being sure not to move too fast.

You now have two identical stretchers, with mortised, V-groove shoulders that should mate cleanly with your tapered legs.

Transfer the half-lap lines from your template routing jigs, to your stretchers. To prevent any costly mistakes, make it really obvious which half of the material is being removed to form the half-lap joint. With a fine-toothed saw and a sharp chisel, cut, chop, and pare away the material until the two stretchers fit together square and snug. I made a small template that could clamp into my bench to support the parts while cutting the joinery, but you could also remove the toggle clamps and use your template jigs.

When gluing this table together, I chose a two-part epoxy. With such thin stock, the moisture in yellow glue would have expanded the dowel and ballooned or cracked the sides of the stretchers where they met the legs. It also allowed a large open time so I could put the table together in one go.

Peter is a Toronto-based furniture designer and maker. When bored in his studio, he enjoys hiding in the dust collector and scaring passersby.