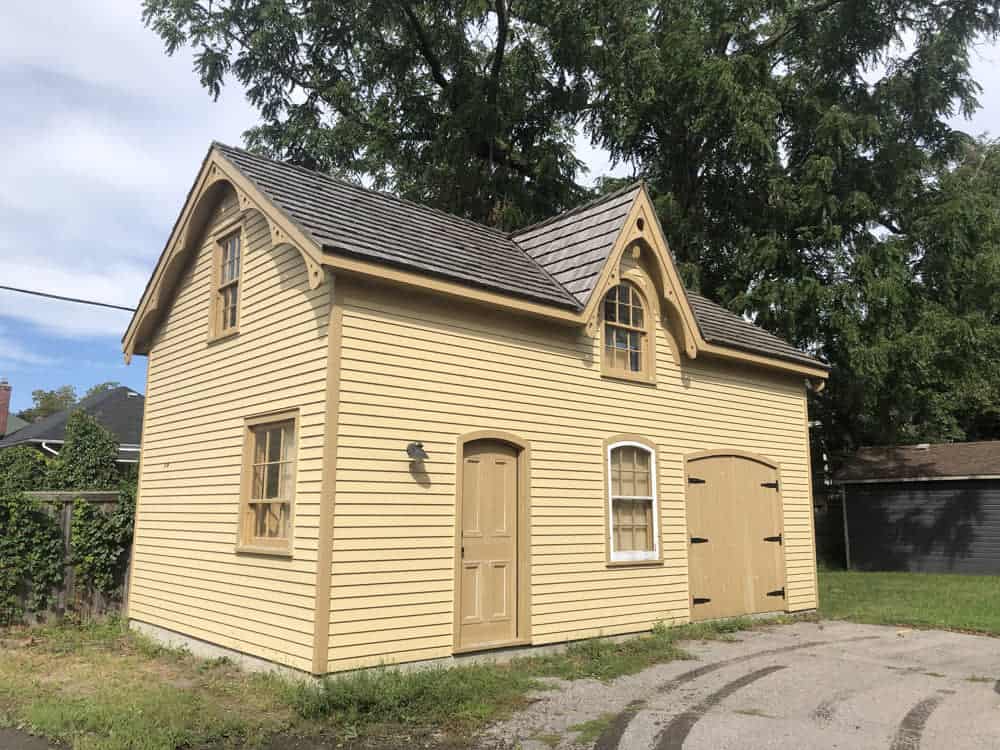 Moving is rarely fun. About 10 months ago I moved my shop to a two-storey building because I sold my house. The new shop has a slightly smaller footprint, but it’s the storage on the second floor that makes all the difference in the world.

I spent a few weeks packing up my stuff, filling probably 30 boxes with a wide range of small- and medium-sized tools, accessories and materials. Dowel jigs, old drills, extra paper towels, stains, chisels and what seemed like a million other small things all got carefully wrapped and packed for their three-kilometre journey across town.

Be ruthless, I told myself

Before I packed, I made a strict promise to myself that I would throw out or give away anything I hadn’t used for a while and give away any offcuts shorter than 4′ long, as I didn’t have the space, energy or patience to deal with any of these things. That was a good idea, and I’m proud to say I tossed out a bunch of stuff that had been hanging around for a decade or more and would honestly never get used. I also posted a few things for free on Facebook which all went quickly. It felt good to be rid of it all.

In the days leading up to moving day I spent countless hours cutting out paper in the shape of machinery and shop fixtures and repeatedly repositioning them on a graph paper drawing of the shop. Sadly, there is a center dividing wall with a pair of sliding pocket doors in the dead center of the lower level. As you can imagine, they were always in my way.

After too many hours spent considering my options I came up with a new plan; get the large pieces like my table saw, workbench, jointer and storage cabinets in place, then just fill in the areas around those pieces with what was left. Who knew how well it would work, but I was pretty sure actually getting into the space was going to be a lot more productive than pushing paper around on my kitchen table.

Moving day came and a crew of three hired guns showed up to help move my stuff. I had already moved a dozen or so smaller boxes, but the large items like my jointer, table saw, bandsaw and a few other machines were far heavier than my back was strong. The younger me would have moved these heavyweights by myself, with many trips between locations, in a beat-up old trailer, but I’d like to think I was getting smarter. The truth is I was also getting weaker, and one wrong move would lay me up for a week or two, and that prospect didn’t appeal to me. It was a full day, but that $1,000 was well spent, as my back lived to tell another tale.

Where did the space go?

The first two-thirds of the items got positioned in my shop fairly carefully. By “fairly carefully” I mean on the correct floor. Wood storage upstairs, hand tools downstairs, finishing supplies upstairs, machinery downstairs. I must have said “up” or “down” a hundred times that day. Towards the end of the day I was starting to realize I had a problem; space was running out, and quickly.

In hindsight, I should have spent more time planning, then have done my very best to make sure the movers put the machinery, fixtures and boxes exactly where they needed to go, but here we were. “Just put it wherever it will fit,” was my answer to the rest of their questions.

At the end of the day the double doors closed, but barely. I went home happy it was all over, but completely dreading tomorrow.

I woke up the next day and got started on making sense of the ugly mess. It wasn’t so much the machines, workbench and other larger tools and fixtures, but the smaller issues like how to store my clamp collection, where to put my table saw and router jigs, and how to locate my hand tools near the workbench so they would be easily accessible. Having said that, the big items weren’t exactly easy, as they needed to be positioned very carefully in order to make for an efficient shop space that would allow me to build and enjoy the space. The table saw was the trickiest of them all, as it needed to cut 4×8 sheets and long lumber. But the smaller items needed to be considered thoughtfully, and then stored so they would be out of the way, but easy to access.

Over that first day I honestly didn’t know if everything was going to fit. Might I have to move some of the machines to the upper level? Or maybe I’d have to trade in a larger machine for a smaller one. Maybe I’d have to employ a “shop on wheels” approach and roll medium-sized machines into the center of my shop to use them, then roll them out of the way to save space.

I spent days getting to a point where I could easily walk from one end of the shop to the other without having to turn sideways or step over something large. It was the old 80/20 rule; the first 80% of my things took 20% of the time to organize, but the last 20% seemed to take forever. When I put these items into their places in my previous shop it was as they were acquired, which was over the span of 15 years. Now it had to be done before I could start to work efficiently in my new space.

As the next few days went on, and I first got the larger items into position, then followed with the smaller bits and pieces, relief began to set in. It was going to work. Everything was going to have a spot, and efficiency was just around the corner. It was a battle that took about a week and a half to win, but the important thing is that I did eventually win.

Next week I’ll show you the final layout and post a few “before and after” photos of the mess on Day 1 and what that same view looks like 10 months later. I’ll also let you know why I put some of the tools and machines where I did, and what I’d do differently next time.